Another missing thread of our pilgrimage – in fact several million threads. This woven tapestry, a miracle of survival from the mid-11th century, once girded the magnificent nave of Bayeux Cathedral (consecrated in 1077) and tells the story of the Norman Conquest of England in 1066 (a date known to every English schoolchild). Since it was commissioned by the half brother of Duke William of Normandy – the Conquerer himself – who was then Bishop of Bayeux, it is hardly surprising that the perspective favors the Normans. Also somewhat galling is the fact that the Cathedral was largely paid for by English money exacted by the said Bishop from his new fiefdom of Kent, and that this 230 ft work of art was sewn by English women (presumably nuns). If you look closely at the tapestry they did manage to get a few digs in at the Normans and the English King Harold himself, although killed in the battle, is shown in a surprisingly favorable light (for example rescuing Norman Knights who were about to drown in the quicksands around Mont Saint Michel). This naturally was before he and Duke William fell out over who should be King of England but says something about Harold’s character. 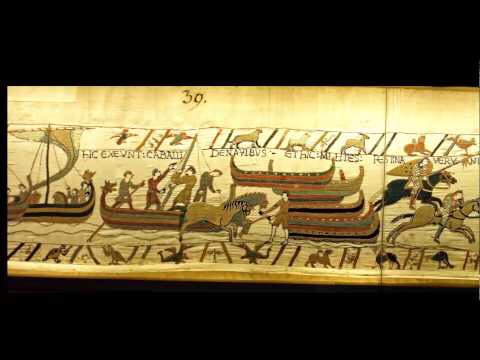