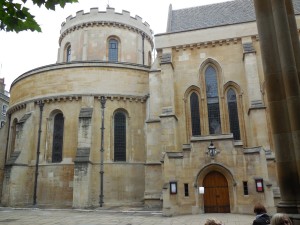 With only a few hours left of my time in London, I was determined to visit the elusive Church of the Knights Templar before leaving for Belgium. This time I decided to take the District line tube to Temple station rather than the Piccadilly line to Holborn, as in my previous foray. This proved to be a better decision, although it is no wonder that few people have even heard of this hidden gem of a church*, let alone know how to find it – save of course for those bewigged denizens of the legal profession who inhabit the historic buildings that surround it.  With names such as Lincoln’s Inn, Kings Bench, Middle and Inner Temple, these so-called Inns of Court go back to the Middle Ages, and occupy a small patch of the City of London between Fleet Street and the river Thames. Today, as in former times, the top brains of the legal profession hang their gowns in these chambers (the great Thomas More, Chancellor of England under Henry VIII – and famously martyred by him during the Reformation – was a member of Lincoln’s Inn in the early 16th century). 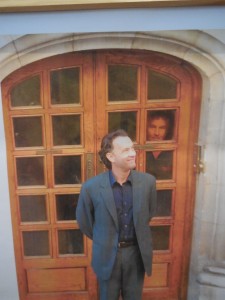 *When I say few people are familiar with this Church, I exclude of course those fans of Dan Brown’s da Vinci Code who will certainly remember this Church as the setting for one of the plot twists in Langton and Sophie’s hunt for the Holy Grail. END_OF_DOCUMENT_TOKEN_TO_BE_REPLACED

The good news about wandering around the  City of Westminster on a Saturday (agoraphobes note) is that the streets are virtually empty: the bad news is that nothing, well almost nothing, is open.