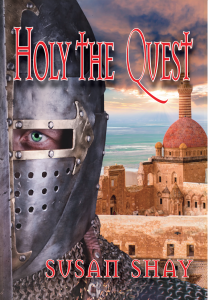 A bastard son desperate to prove himself. A sadistic half-brother determined to destroy him. And the quest for a holy relic of such power that it could determine the fate of Christendom. Set within the pageantry and brutality of the Crusades of the 12th Century, Holy the Quest tells the story of Rohan de Brancion, whose youthful desire to become a knight and drive the despoilers from the Holy Land is tested by violence, intrigue and betrayal. His quest becomes a journey of self-discovery, challenging the very foundations of his faith as the armies of Christendom fight ~ and fail ~ to crush the emerging power of Islam.