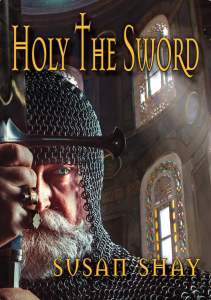 Rohan de Brancion’s world is torn apart when he loses everything he holds dear to the encroaching power of Islam. Vowing vengeance, he joins the military order of the Knights Templar where he rises to become the Relic Master. Disillusioned by the failure of the Crusaders to bring about the “kingdom of heaven on earth” after the slaughter of his order by the great Muslim leader, Sallah-ad-Din, Rohan resumes his quest for the sacred talisman that will restore Christendom. His journey ends amidst the destruction of the ancient Christian capital of the east, Constantinople, by the crusading armies of the West.

8 thoughts on “Holy the Sword”