Whether you are a lover of historical novels or just someone who happens to write them, it would be hard not to be impressed with this year’s line-up of guest speakers and attendees at the annual HNS Conference in Portland (#HNS2017)

The guest of honor, Geraldine Brooks, is one of my all-time favorite writers. Before she was a Pulitzer Prize winning novelist for her second work of fiction, March, she was a brilliant international correspondent for the Wall Street Journal and author of Nine Parts of Desire: The Hidden life of Islamic Women, written twenty years ago but still relevant today. The other guest of honor David Ebershoff, perhaps best known for his novel The Danish Girl, also has a biography that would knock your socks off – not only is he an award-winning novelist in his own right, but also the distinguished editor of multiple New York Times bestsellers. One could not be blamed for having an acute attack of “Fan-itis” amidst such luminaries. As my stepson used to say whenever at a loss for words, “You hadda be there.”

The top line take-away for me was Gratitude. Gratitude to those who put themselves on the line to share publicly their writing and publishing experiences; gratitude to the organizers for their incredible hard work and spectacular results; gratitude to all the panelists for sharing their wit and wisdom; gratitude to all of the lovely people who said, “Tell me about your novel,” and then listened!  Gratitude to all attendees who were just so darned “civil” and interesting to boot! Gratitude to my best cheerleader and fellow author, the immensely talented Jan Flynn. And finally, gratitude to those hard-pressed literary agents who showed up and showed an interest as we pitched our novels to them. To digress, these folk receive upwards of 8,000 query letters a year. And that’s just the query letter, which as far as an agent’s job is concerned is only the tip of the proverbial iceberg (there’s got to be a better metaphor!). Let’s just say this conference was an awesome experience, and I mean that in the fullest sense of the word.

So now for a little sober talk while we are on the subject of icebergs. The words scary, chilling, dangerous, intimidating, un-scalable come to mind, words that might be applied equally to icebergs and the world of publishing today. Here are some of the statistics: Only 10% of those queries letters I was talking about ever make it to the next step, a “request for material,” which could be anything from the first three chapters of your novel to the first 50 pages (or less). Only 10% of that 10% gets a follow-up request for submission of the actual novel. And of that 10%…well, if you are an aspiring “debut” novelist (polite word for “first-time” novelist) you don’t want to know the answer!

Another interesting factoid: a novel (and this may include non-fiction too) is the only commodity I can think of that has to be sold six times! From writer to agent, from agent to editor, from agent to publisher, from publisher to distributor, from distributor to bookstore (online or otherwise), from bookstores to the public in all of its many-headed manifestations.  Every step of this process is littered with rejections, fraught with financial risk and guaranteed disappointments ‑ all of this if you are lucky or brilliant enough to secure an agent in the first place.

There is another way, actually several other ways of getting a book published, referred to as “indie” (independent) publishing, self-publishing, and the newer category of hybrid-publishing. Writing about this emerging industry has become an industry in itself. Blogs and books on the subject abound. Suffice to say the path is as perilous and uncertain as traditional publishing, but for many it’s the answer to all of those rejection letters; to others it is the best thing since spellcheck. The conference offered plenty of insights (pros and cons) into these worlds, which I have to say, left me more informed but no less confused. Bottom line: there’s no easy path to paradise.

Why do we do it then? It’s got to be love, right? Not exactly. As in most other professions, particularly artistic ones, writers have to break rocks in the course of creating rough diamonds, even imitation rough diamonds. And it takes a lot of time as well as a team to produce the final sparkling (you hope) gem. It’s tough, hard work that requires discipline, patience and perseverance (none of the above being among my strong points!). It’s not a hobby though many people are happy to make it one – happier perhaps than those who call writing their profession. I think the urge to write has more to do with compulsion than love, an itch that has to be scratched, a mountain that has to be climbed, a rainbow that…well, you know the way the song ends…“until you find your dream.”

To end on a happy note…Meeting some of the historical novelists I most admire and those I still look forward to reading was one of the highlights of this event. Thank you especially to Geraldine, David, Margaret, Kate, Heather, Gillian, Pat, Nicole, Christopher, Sherry, Rebecca, Mitchell, Mary, Alison, Susanna and Carol. 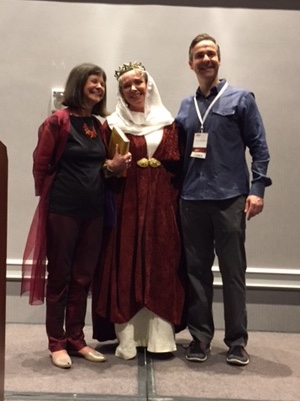 Oh, and it was pretty cool to win the “best evocation of a historical character” award! So in conclusion “Thank you, Eleanor”!