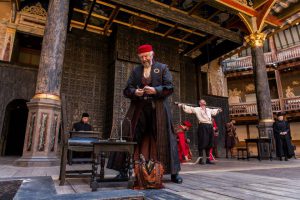 Yesterday I walked out of a production of Shakespeare’s The Merchant of Venice that was showing at our local cinema. It was the brilliant, “internationally acclaimed” production from the Globe Theater Company, directed by Jonathan Munby and starring Jonathan Pryce. But I walked out twenty minutes before the end because I couldn’t bear to sit through another minute after watching the utter humiliation of the Jew, Shylock, at the hands of his triumphalist Christian “opponents.” Yes, it was “just a play,” and a play I have seen many times before, but there was something frighteningly contemporary about what was playing out on the set, something which created a reaction in me that I had never experienced watching previous productions of this play.

A quick background: Shylock, a Jew in 16th century Venice, lends money to a merchant, Antonio, who in turns gives the money to his dear friend, Bassanio, so that the latter can pursue his love interest in a manner befitting a gentleman. Shylock hates Antonio for the many insults (and in this production, physical abuse) he and his fellow Jews have suffered at the hands of Christian merchants, principally Antonio himself. However, Shylock agrees to lend Antonio the money without charging interest on one condition; should the merchant fail to repay Shylock in the full amount on the appointed day, Antonio will forfeit a pound of his own flesh.

Confident that he will be able to repay Shylock in time, Antonio accepts the terms which are written up according to Venetian law. When Antonio’s ventures all fail and he cannot repay the debt, Shylock insists on exacting the full penalty, notwithstanding the fact that Antonio’s friends come up with twice the amount owed. In a tense courtroom scene, we see Shylock sharpening his knife to exact his “pound of flesh,” while everyone from the Doge of Venice to the court-appointed “judge” to Antonio’s friends all plead with Shylock to show “mercy.” But all the Jew wants is “justice” and “revenge” – his full “pound of flesh.”

This is the point in the play when the audience is clearly supposed to lose all sympathy for Shylock – if they had any in the first place. And of course, had Shylock actually got away with slicing a pound of flesh off the living Antonio, spread-eagled and stripped to the waist before the court, that is surely where our sympathies would have stayed.

But then comes the climax of the play when the brilliant “judge” turns the tables on Shylock and tells him that he can have his pound of flesh, “but in the cutting it, if thou dost shed one drop of Christian blood, thy lands and goods are by the laws of Venice confiscate unto the state of Venice.” Shylock, realizing he is trapped, is willing to settle, but it’s too late: he has attempted to take the life of a Venetian citizen and now must himself pay the penalty for his crime.

So much for Shylock’s “justice.” Now he receives a heavy dose of Christian “mercy.” His life is spared but he forfeits all of his goods, partly to the state and partly as a fine to the “wronged” Antonio, who then comes up with a few “merciful” refinements of his own. Not only is Shylock required to leave what remains of his property to the man who “stole” his daughter, taking all the money and jewels he could lay his hands on in the bargain, but, as a final piece of retribution, Shylock is forced to convert to Christianity.

Shylock’s last few lines, as written by Shakespeare, convey nothing of the gut-wrenching scene enacted on the stage by the superb Jonathan Pryce. Shakespeare has Shylock say merely that he accepts the court’s verdict and begs leave to go. “I am not well. Send the deed after me, and I will sign it.” Pryce turns this into an exquisitely agonizing moment in which we see the howling pain and total humiliation of the Jew as he accepts the loss of everything he ever possessed, including of his own identity.

Did Shylock get his “just deserts?” I think Shakespeare intended his audience to think so. Written at the end of the 16th Century, The Merchant of Venice was both set and written at a time when anti-Semitism was rampant in Europe. But this is also a morally ambivalent play and Shakespeare is too great an artist to bludgeon his audience into moral certainties. Thus, early on in the play, he gives Shylock a speech which has been quoted down the ages whenever there is a plea for understanding based on our shared humanity.

It is true that Shylock goes on to say that Jews have as much right to revenge as Christians and that “the villainy you teach me I will execute, and it shall go hard but I will better the instruction.” So, this is not exactly a conciliatory speech and it is clear the audience, while they may sympathize with Shylock, are not ultimately expected to side with him.

That at least is the way I read and saw the play for most of my adult life. Yesterday I saw the play through a different lens. The lens of contemporary America where our government is banning Muslims from our country and deporting people for no other crime than that their parents brought them here as children without proper legal documentation. My purpose is not to argue the case for or against these government actions. I happen to be against them. But more than my opposition to specific actions on the part of our government, I am opposed to the stirring up of racial and religious hatred and the deliberate creation of a climate of distrust and fear. My reaction to seeing The Merchant of Venice in such a climate was visceral. We don’t have to read Shakespeare to know where these punitive actions and distorted emotions lead. At least we would know if we paid the slightest attention to the history of the last century — and every century before that.

I do not know what director Jonathan Munby intended, but to my eyes he missed no opportunity to show the morally ambiguous circumstances surrounding his lead characters. In the opening scenes, Shylock and his brethren are the victims not the aggressors as they walk through the streets of Venice where they are abused and assaulted by its “respectable” Christian citizens. It is worth remembering that for centuries Jews had no choice but to become money lenders since they were banned from all other occupations. Christians in turn were banned by the Church from charging interest for lending money. Jews, therefore, were tolerated only to the degree that they were useful in doing the dirty work for Christians.

Antonio’s friends come across as spoiled, shallow and entitled frat boys. One of them seduces Shylock’s daughter and elopes with her, taking her father’s money and jewels. Another is clearly a drunk and a womanizer, another a self-indulged gambler who plays on the affections of Antonio to get the money he needs to court a high-born lady, thereby putting his friend at great risk. Perhaps we are supposed to applaud this behavior. Perhaps we are supposed to approve of Shylock’s daughter stealing her father’s money and running off with some oaf; perhaps we are supposed to rejoice in her subsequent conversion to Christianity. But in subtle ways the director makes the audience squirm as Jessica exchanges her traditional Jewish dress for an elaborate Venetian one and has a cross fastened around her neck for good measure. This foreshadows the enforced conversion of Shylock which we never see but experience through the agony of the Jew as he “accepts” this final indignity.*

I have just completed the first of three books set at the time of the crusades in the 12th and 13th centuries. These books — Holy the Quest, Holy the Sword and Holy the Blood — are set in Palestine, Byzantium and France respectively. At the heart of each story lies a value system that discounted the humanity of those who did not share the same beliefs, culture or color of skin. It was the dominant value system of western Christianity.

After years of believing that we in the west were finally moving away from these exclusionary values, I am devastated to see them resurfacing in new but equal ugly and dangerous forms. Perhaps this is why this Merchant of Venice so moved me to pity and terror, not for Shylock or those twit-brained Venetians, but for us.

* I wrote this before being told that the ending of this production (which of course I missed!) includes a scene not in Shakespeare’s original play that actually shows the conversion of Shylock and the devastated reaction of his daughter, Jessica. Am I sorry I missed it? Yes and No. I think I saw enough.

One thought on “Hath not a Jew eyes?”