Paris offered us one more fierce lashing yesterday, rain gushing through gutters and gargoyles before settling down into something approximating April weather (it is in fact mid-June). Romantic songs notwithstanding, one does not go to Paris for the weather certainly not this summer anyway. Since our last few days were more or less on our own (barring a wonderful morning service at the American Cathedral – a beautiful welcoming place thanks to Dean Laird and her terrific staff and superb choir), I had time to follow my own quirky passions.

This began (the day before) with my usual Paris pilgrimage to the Cluny Museum – the best collection of medieval artifacts in Paris.  Among the things I love about the Cluny (so called because it was the Paris home of the Commendatory Abbots of Cluny – who would in my opinion have been better employed tending to matters back at their Abbey in Burgundy) is that it was built to be lived in and so the exhibits seem to belong in a way they often do not in regular museums.  Back in the mists of time, before Christ, there were Roman baths in this place, and very impressive ones too which one can still see. Over the centuries the building has undergone many changes. Today, standing close to the Sorbonne, it remains a superb example of blended Gothic and Renaissance domestic architecture. 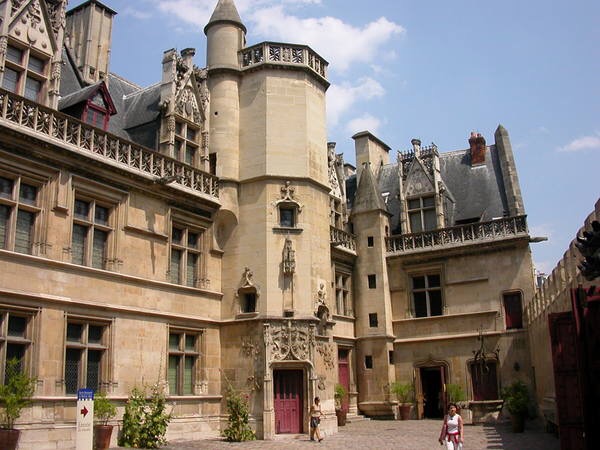 Most visitors to the Cluny come to see the magnificent 15th century tapestries called the Lady and the Unicorn. There are 6 of them, each featuring a different lady all exquisitely attired in the richly adorned fashions of the day and flanked by a unicorn and a rather dog-like “lion” (clearly the artist had never seen a real lion). Five of them celebrate the 5 senses – sight, sound, touch, taste and smell – and so all these ladies are beautiful muses for those of us who love to write. The 6th tapestry, however, shows the Lady divesting herself of her jewels (or is she putting them on?) and is called mysteriously “À Mon Seul Désir”: What is the lady’s one desire?  If she is putting the final touches to her attire by donning her jewels, then perhaps her one desire is to seduce the unicorn through the delicate application of each sense.  But if she is taking off her jewels, then surely her one desire is to seek a different deeper path not dependent on the physical senses.  We don’t know.  But if you are interested in the story of this unique tapestry that goes beyond Google  and Wikipedia, read Tracy Chevalier’s excellent novel The Lady and the Unicorn which brings the tale magically to life. 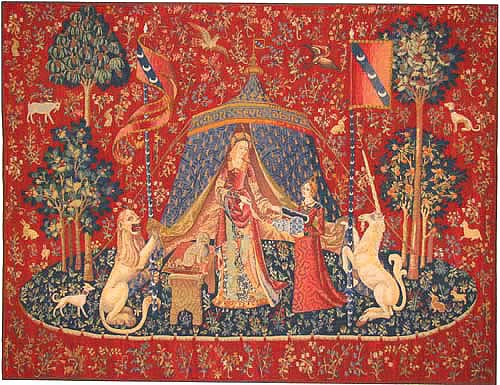 My personal pilgrimage to Cluny however is focused on a much less dramatic exhibit.  I love to look at the old reliquaries and even more the little case of pilgrims’ souvenirs – most of them dredged up from the Seine at one time or another. These tiny badges or trinkets medieval pilgrims picked up to prove that they had stayed the course and reached their destination were the beginning of the whole souvenir business which of course is still thriving today. However to my disappointment the one I was looking for was again not on display. It is a small replica of the Shroud of Turin before it became “of Turin”.  The legendary Shroud, allegedly the burial shroud of Jesus and the subject of my trilogy, first appeared in France in the mid 1350s and was displayed in a humble chapel in the tiny village of Lirey in the county of Champagne – the seat of the De Charny family.  Although the head of the family Geoffrey de Charny held the supreme honor of bearing the Royal standard – the sacred Oriflamme – when the king rode into battle, the de Charnys were not from the top flight of French nobility and the mystery remains as to how the Shroud came into their possession (you will have to wait for the book to find out!). 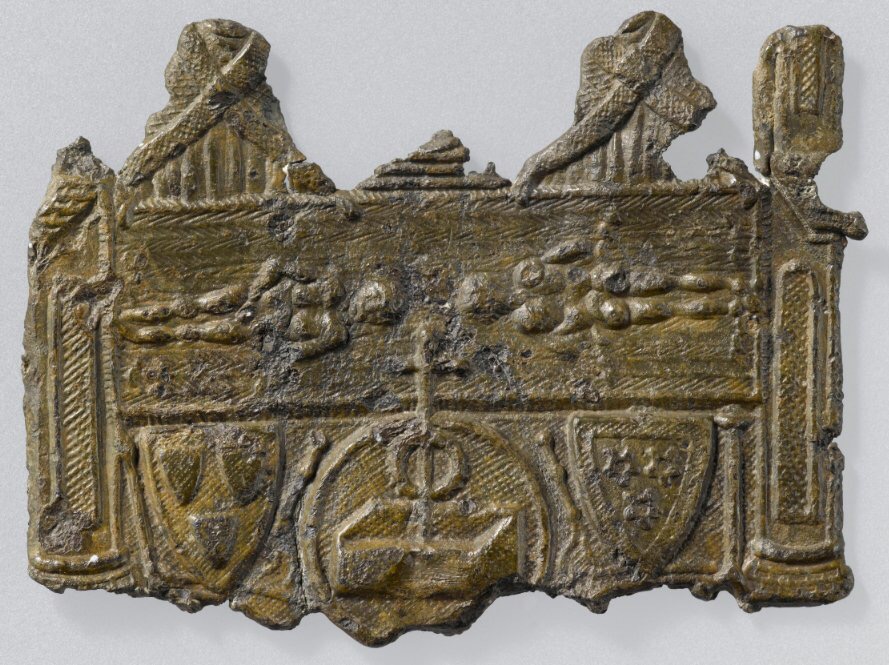 An early pilgrimage souvenir of the Shroud of Turin, 14th century 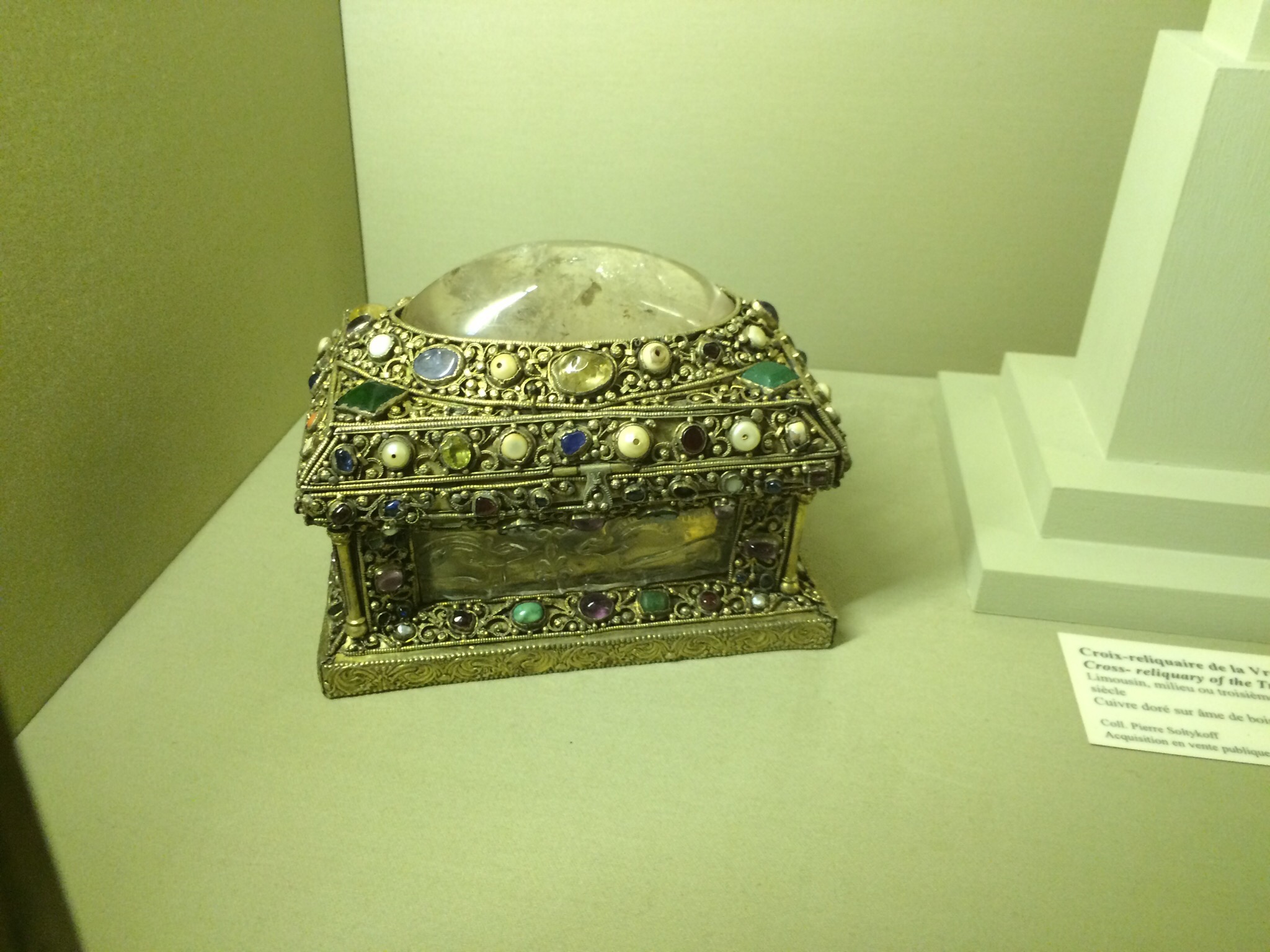 A beautiful reliquary from the 13th century

Finally a trek to a little publicized exhibit of medieval fashion at the Tour de Jean Sans Peur (John the Fearless, Duke of Burgundy) – one of the oldest buildings in Paris. The Burgundian dukes tended to have somewhat descriptive sobriquets – Bold, Brave, Good (even if they weren’t anything of the sort) but they were undoubtedly rich and this tower is all that remains of their no doubt sumptuous Paris “Hotel.”  The exhibit was a fascinating walk up and down the twisting spiral staircase through the fashions of three centuries. A new discovery for me was that black velvet was the most costly material of all because of the difficulty of the dyeing process.  Hence it was only worn by the wealthiest and most important of nobles – apparently it was all Philippe the Good ever wore! 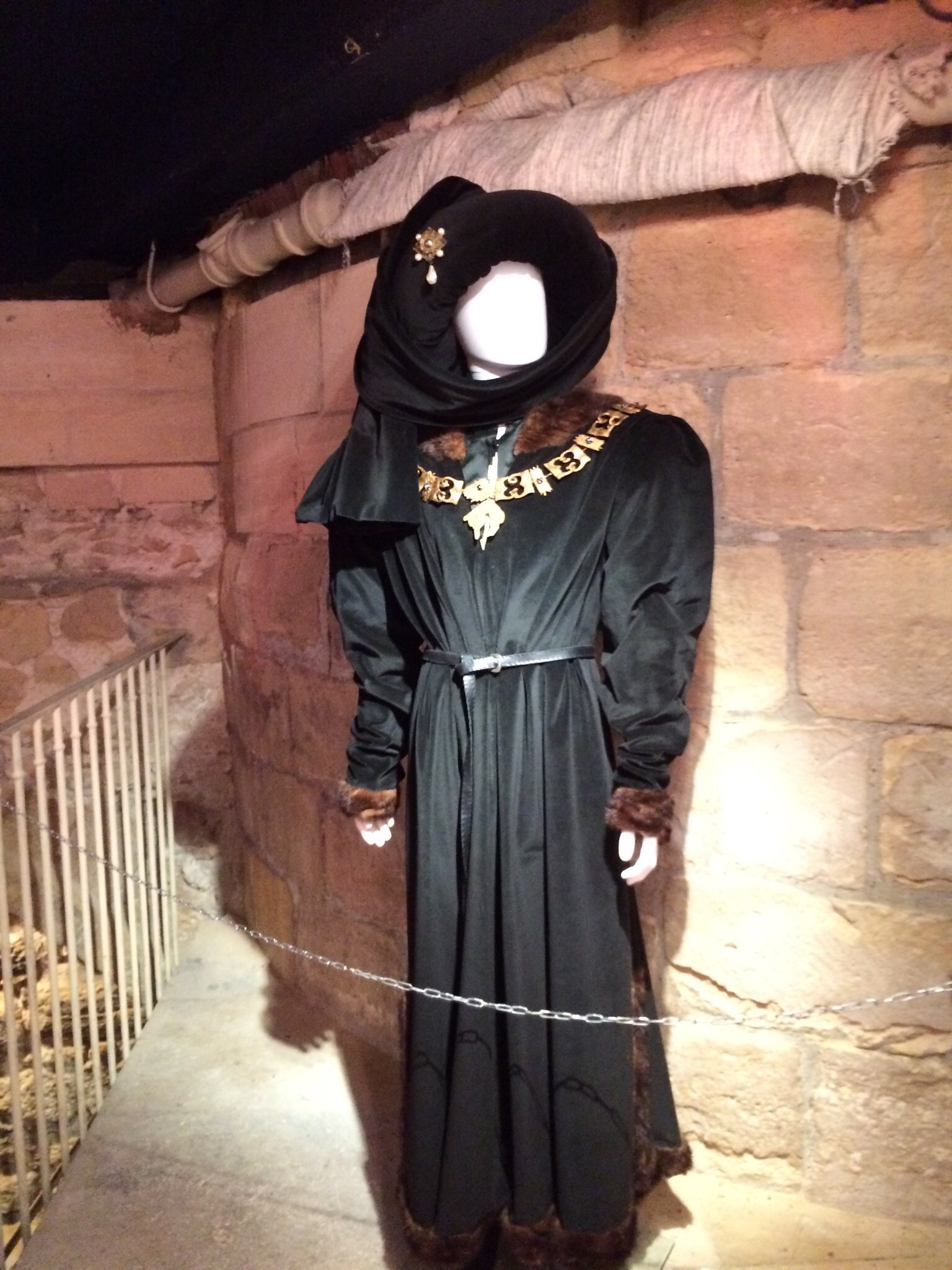 Based on a portrait of Philippe the Good 1430