Today in Bayeux we visited one of the least known labyrinths in France, the faded brick labyrinth in the old Chapter House in Bayeux Cathedral. Last week we visited one of the most unusual – the stunning black and white octagonal labyrinth in Amiens Cathedral. And in a few days we will be visiting the “Grandmother” of them all, the sublime 11 circuit labyrinth in Chartres Cathedral.  We are holding our collective breath that the labyrinth in Chartres will finally have re-opened after several years during which the surrounding nave has been under restoration – if it is, that would indeed be a miracle! In the meantime a few words about these other marvels of medieval ingenuity.

The Amiens labyrinth is of course well known for its distinctive design and apparently miraculous state of preservation.  It is however a 19th century copy of the original which makes in none the less impressive, as is the entire cathedral – another miracle of preservation given the destruction wrought on Amiens particularly by the wars of the last century.  There is a particular harmony about Amiens Cathedral, a unity of design which is sometimes lacking in other cathedrals in France (there are 84 of them still – a greater number than in the whole world combined, or so we were told – I haven’t counted!). This is explained by the fact that Amiens Cathedral, like Chartres and Rheims, was built over a relatively short period of time, little more than 50 years, which is quite amazing when you consider the magnitude of these projects and the basic nature of 12th century technology (actually not so basic when one considers the mathematics, engineering, stone masonry and sheer brilliance of the design and execution involved). 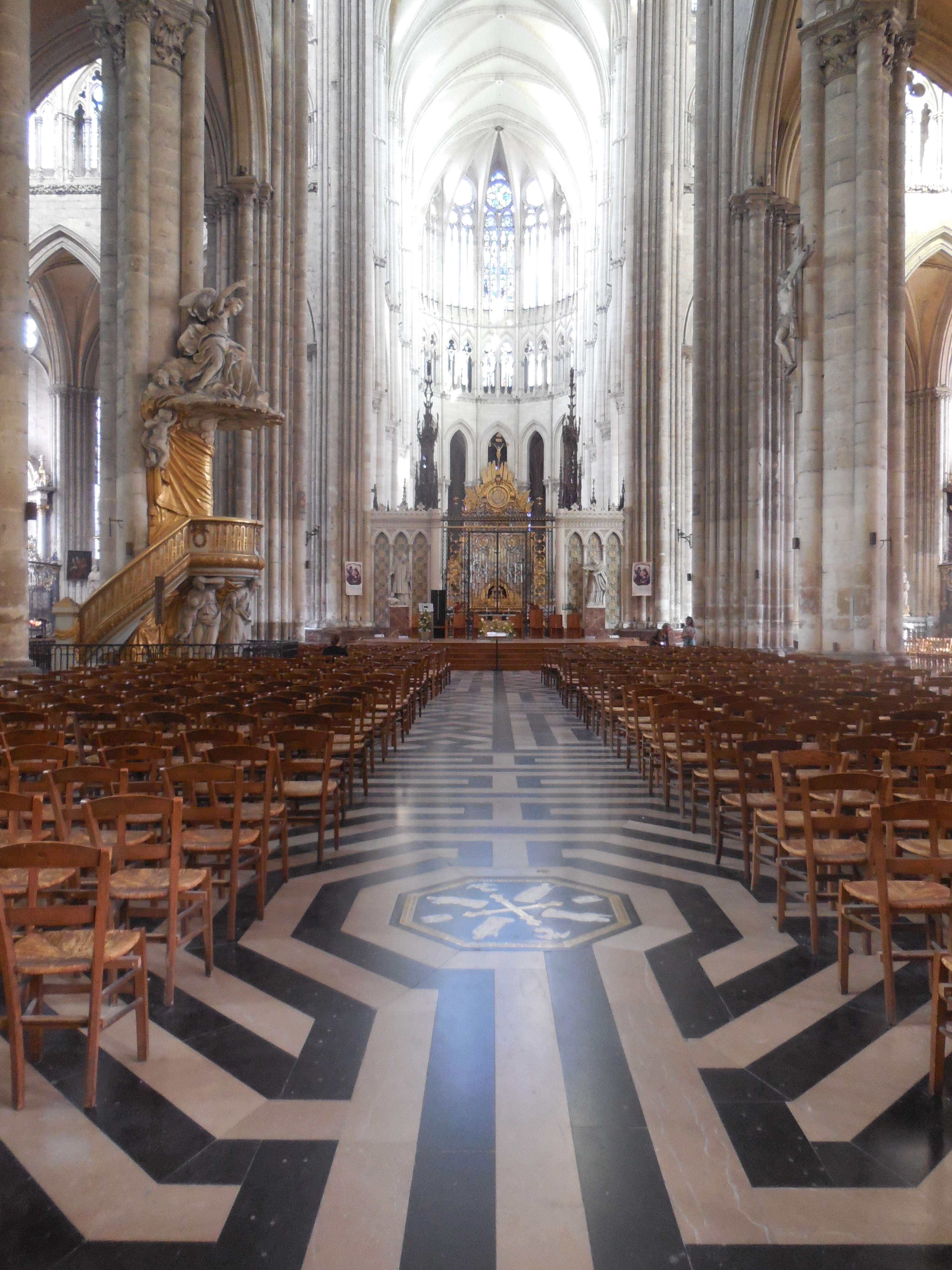 Another great marvel of Amiens is its polychrome sculptures surrounding the ambulatory and dating from the 13th century.  In the 1970s it was discovered during a cleaning project that the western portal sculptures had been similarly painted and after intensive scientific analysis they were able to reconstruct and project through lighting at night the way the cathedral would have looked when it was first built – perhaps a little gaudy for modern tastes but stunning nevertheless.  It sort of changes one’s image of medieval cathedrals from those pristine alabaster monuments into something more like a carnival display at Mardi Gras!

Back to labyrinths.  In the Middle Ages there were about 23 of them in France. Now there are really only two that are still on “active duty” as it were – Amiens and Chartres (more about the latter in a few days). But there are still a few other hidden labyrinth treasures and yesterday we were fortunate enough to see, one of them in the Chapter House of Bayeux Cathedral.  This is not, and never was, open to the public – monks only please.  And today it is barely visible to the camera (which by the way we were not allowed to use so this photo is from another website).  The floor however was once covered in magnificent tiles and the walls adorned with fine paintings. I think it’s safe to say that life in the Middle Ages was better for the monks and canons of wealthy Abbeys and Cathedrals than it was for your average Jacques Bleu! 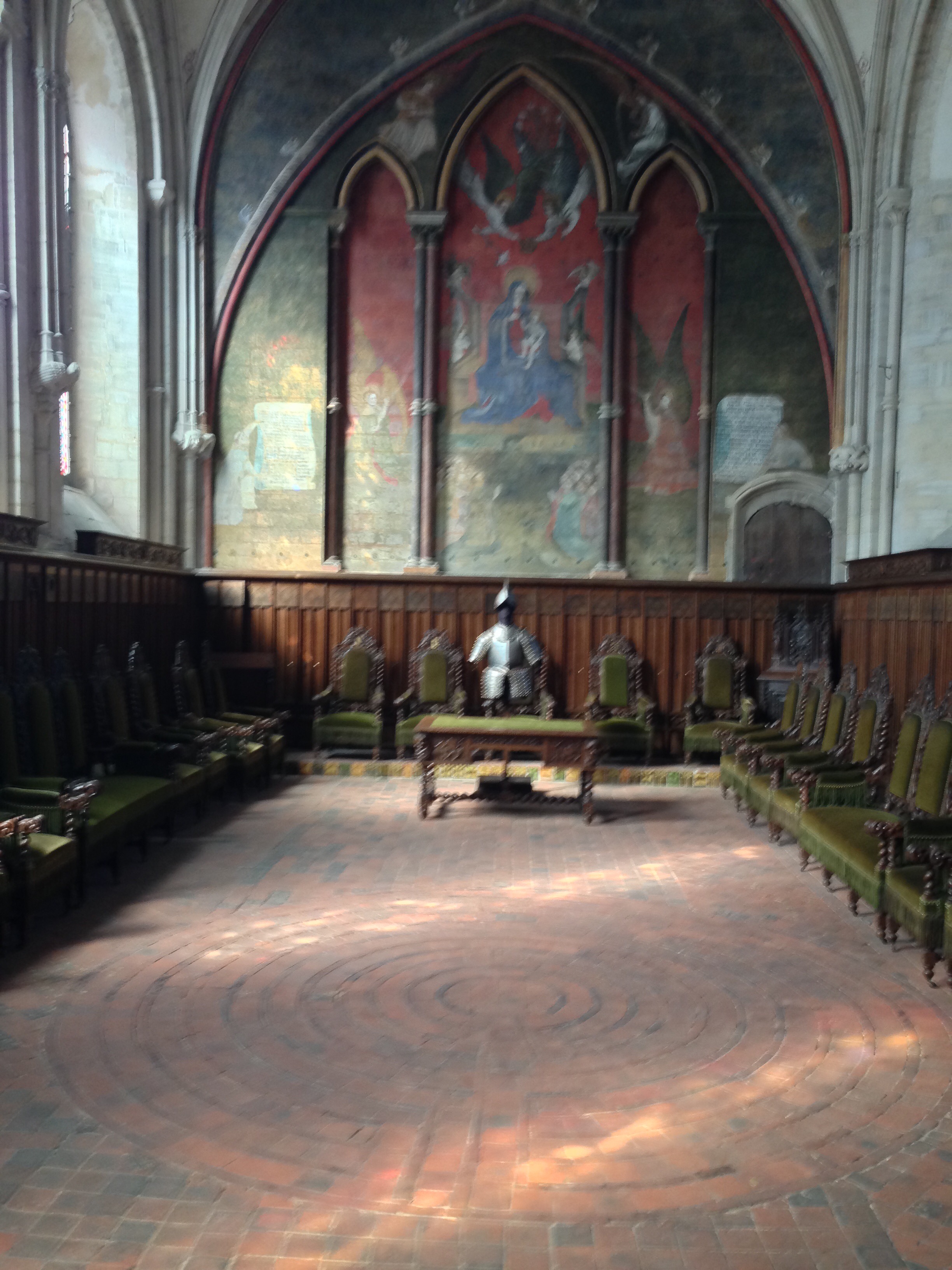 Onward to Mont Saint Michel. I cannot leave Bayeux without a word about its famous tapestry but that will have to wait till another post – the vans are leaving!