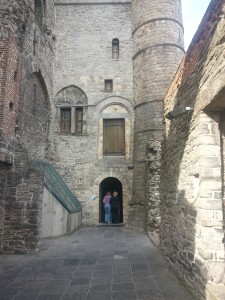 I must be still thinking of Canterbury and those intrepid Pilgrims because I can’t think of Ghent without recalling the Wife of Bath who, in addition to having outlived five husband, was also a smart business woman who, when it came to cloth-making “Had switch an haunt she passed hem of Ypres and of Gaunt”. “Gaunt” was the way the English pronounced Ghent in the Middle Ages – hence John of Gaunt, third son of King Edward 111, so-called not because he was emaciated but rather because he was born in this town, as were many other notables in the Middle Ages (including the Holy Roman Emperor Charles V) when the city was at the pinnacle of its power and wealth. But to return to what the place is called, this is a matter of some confusion today, as it doubtless was in the Middle Ages. Since it is a trilingual city where the natives speak Flemish and Dutch (that sound just the same to me) and French, we have Gent (Dutch and Flemish) Gand (French) and then Ghent — to remind the rest of us to say “Hent.”  But it really doesn’t matter too much what you say because everyone (and I mean everyone including small children) speaks English, which is a great relief.

This is a really marvelous city, something of a hidden gem in the European treasure trove — the Belgians clearly haven’t the same gift for self-promotion as the French.  But this city is definitely “vaut la visite” as the French say about every minuscule hamlet in their neck of the woods.  I have now spent three footsore awesome days here and loved every minute, sight, sound and taste of it, from the chocolates, to the 200 different beers (no, haven’t sampled all 200 of them!) to the absence of private vehicles in the pedestrian-only center of town, to the music coming from freelance pianists playing pianos randomly stationed around the center of town, to (finally!) the historic sites, the purpose of my visit.

So this is where the hero of Holy the Sword (second book in the trilogy) spent his apprenticeship to become a knight at the “Court” of Thierry, Count of Flanders.  Court is probably way too grand a word for anything going on here in the mid 12th century.  Life was pretty rough even for a lord as powerful as the Count of Flanders.  Ghent was just beginning to come into its own and it would be another two centuries before it hit its high water mark. Still for my hero, Rohan de Brancion, arriving from the backwoods of Burgundy, this city was no doubt overwhelming with its ancient Abbeys, churches, bridges and canals, and perhaps most of all, its merchants bustling around the already thriving port— even though Ghent is an inland city it was connected even in the 12th century to the wider world by a network of canals and rivers, and was already a great center for the wool trade.

At the heart of the old city is the Castle of the Counts —the Gravensteen.  I would very much like to claim this formidable fortress with fairy tale touches as the setting for Rohan’s apprenticeship, but alas is was not built, at least not in its present configuration until the 1180s so thirty-three years after Rohan left here for the Holy Land.  Still, we know there was a castle on this site even earlier, and some of it remains, particularly in the inner keep where one can still see what once were stables, storage houses, and most fearsomely, dungeons – no doubt later used for that purpose as the castle literally grew upwards to include fine halls and crenelated battlements.

Here’s a piece of trivia: this kind of battlement that we think of as quintessentially medieval European actually was copied from the Saracen castles the crusaders found in the Holy Land. Gravensteen is one of the first examples of this design implemented by Count Phillip of Flanders, son of Count Thierry, Rohan’s “boss.”

So back to 1147 when Rohan, mounted on his warhorse and fully kitted out for battle, set out from the castle precincts along with his fellow squires on a dangerous game.  It was called a melee, and it was the way young squires and knights learned the art of war before they actually had to face a real enemy. There would be two “teams” as it were, and they would meet at some pre-appointed place and duke it out.  The idea was to see which side could capture the most hostages — the richer the better obviously — and hold them up for ransom along with their horses and equipment.  Unfortunately it was a rough sport and people did get hurt and even killed (you’ll have to wait for the book to see what happened to Rohan!)

The amazing thing about these melees was that they were a “spectator” sport and folk would turn out from all over the place to cheer on the “home team”. It was a real carnival atmosphere. Stands were erected all around the area designated for the melee, the better to see what was going on, and for the finer folk and ladies of noble birth, mock castles with raised platforms. Some of the hottest action took place around these “castles” as the combatants sought to impress the onlookers, who no doubt yelled and cheered them on— not much has changed except perhaps the choice of weapons!

Tomorrow I’m off to visit the site of my melee — today a respectable suburb of the City of Ghent. Till then here are some pictures of the Castle of the Counts (click on a photo to see a larger version).